Does High School Determine the Rest of Your Life? 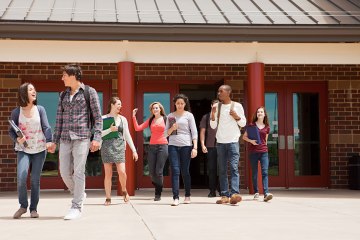 I thought of Vonnegut’s observation after I read a new study released by the National Bureau of Economic Research titled simply “Popularity.” Individuals’ social status in high school has a “sizable effect” on their earnings as adults, reported lead author Gabriella Conti of the University of Chicago: “We estimate that moving from the 20th to 80th percentile of the high-school popularity distribution yields a 10% wage premium nearly 40 years later.”

Conti’s study is part of a wave of research looking at how our social experiences in school connect to our lives after graduation. “We’ve all wondered at times if high school determines who we become as adults, and now we have the empirical data to test that notion,” says Pamela Herd, an associate professor of public affairs and sociology at the University of Wisconsin-Madison.

Herd is a co-director of the Wisconsin Longitudinal Study, one of the largest and longest-running investigations of how lives unfold in high school and beyond. The study, funded by the National Institute on Aging, has followed more than 10,000 members of Wisconsin’s 1957 graduating class for over 50 years, beginning when they were seniors and continuing throughout the decades as they established careers, raised families and began their lives as retirees and grandparents.

The Wisconsin program is the granddaddy of a generation of studies that are just now coming to fruition. They’re being joined by a slew of shorter-term studies conducted by psychologists, sociologists, economists and epidemiologists, researchers from varied fields who have all taken an interest in the high school years. “Social scientists are realizing that many of our adult outcomes can be traced back at least in part to our experiences in high school,” says Robert Crosnoe, a sociologist at the University of Texas at Austin and the author of Fitting In, Standing Out, a 2011 book that draws on his seven-year study of the adolescent social scene.

It’s not just the turbulent life stage of adolescence that has consequences for our later lives, Crosnoe stresses, but also the interactions of this developmental transition with the structures and hierarchies of high school. The institution has its origins in the secondary schools of the early 19th century, but it was only in the past 50 years or so — when high schools swelled as the children of the baby boom entered adolescence and youth culture took center stage — that our popular notion of high school took shape. Namely: high school as a formative life experience, as social as it is academic, in which students encounter a jostling bazaar of potential identities — from jock to prep to geek — and choose (or are assigned) one that will stay with them for years to come.

And yes, there’s some truth to the yearbook predictions, social scientists find. Broadly speaking, the brainy grinds and the glad-handing class officers achieve success as adults. The jocks are fitter and in better health. The outcasts and dropouts are more likely to be depressed and unemployed. The kids who drank and smoked pot under the bleachers are mostly still drinking and doping, sometimes to excess.

But it may be time for a re-evaluation of many of our notions about what matters in high school, say researchers who study adolescence and its aftermath, including popularity and friendship, intelligence and hard work. For example, “popularity is not all it’s cracked up to be,” says Kathleen Boykin McElhaney, a psychologist at the University of Virginia. Her study of 164 adolescents, published in the journal Child Development in 2008, found that teenagers who don’t belong to their schools’ “in” groups can still function well socially if they find a comfortable niche among their classmates. As long as they feel happy with themselves and their friends, it doesn’t matter how popular they are. “Our work shows that popularity isn’t all that important,” says McElhaney. “The key is finding a group of people with whom you can feel at ease being yourself.”

Indeed, recent research suggests that popularity isn’t entirely positive. Belonging to the cool crowd is associated with higher rates of drinking, drug use, sexual activity and minor delinquency during adolescence. And the connection between social status and risky behavior may be a lasting one: a 2008 study co-authored by Marlene J. Sandstrom, a professor of psychology at Williams College, reported that popularity in high school was associated with higher rates of substance abuse and sexual promiscuity in the three years after graduation.

What’s more, popular kids may not even be well liked. Researchers distinguish between two types of popularity: perceived popularity, or how socially prominent individuals are, and sociometric popularity, or how well liked they are. Membership in the two groups often doesn’t overlap. Sociometrically popular teens have a wide group of friends and are described by classmates as trustworthy and kind; perceived-popular students are admired and envied by their peers but are also regarded as arrogant and stuck-up. And no wonder: many studies have linked perceived popularity to high levels of what researchers call relational aggression: spreading gossip, engaging in taunting and bullying and practicing exclusion and the silent treatment in order to maintain one’s social position.

If the populars don’t have a lock on friendship, neither do the brains have an exclusive claim on post–high school success. In a recent study, Stephen D.H. Hsu and James Schombert, physics professors at the University of Oregon, analyzed undergraduates’ high school test scores and college grades. “Low SAT scores do not preclude high performance in most majors,” they reported. High-achieving students often succeed because of their dogged effort, they pointed out, rather than innate brilliance. “Our results suggest that almost any student admitted to university can achieve academic success, if they work hard enough,” the authors concluded.

Another study, by economists Jeffrey S. Zax and Daniel I. Rees of the University of Colorado, examined the connection between individuals’ IQ and academic performance, measured in the last year of high school, and how much money they were making in their mid-30s and early 50s. Using data from the Wisconsin Longitudinal Study, they concluded that “previous analyses have overstated the role of intelligence in economic success.” Hard work and the development of capacities like conscientiousness and cooperation also matter for success, not to mention personal satisfaction and fulfillment. Coveted as they are in high school, brains and popularity get you only so far in the real world.

For some unhappy teens, life is bad in high school and threatens to stay that way if they don’t get help. For these students — the ones with drug and alcohol problems, the ones who are bullied and harassed, the ones who drop out of school altogether — intervention by adults is more important than ever, says Crosnoe. “Education is critical to making our way in today’s society, especially today’s economy, and kids who miss out on the full academic and social experience of high school will feel the effects of that lack reverberate through their lives for many years to come.”

For the rest of us, high school is one important experience among many — a lasting influence, but one that is hardly determinative. In the study by Zax and Rees, the authors ended on an unexpected note. “The most striking result,” they said, was how little they were able to make predictions about people’s adult lives on the basis of characteristics measured in adolescence. At least 75% of the variation seen among people in middle age couldn’t be foretold from what they were like in high school — meaning, they wrote, that “there is plenty of opportunity for individuals to rise above or fall below the level to which their endowments and environment might direct them.” So maybe life is more than just high school, after all.

This article is from the Brilliant Report, a weekly newsletter written by Paul. The views expressed are solely her own.