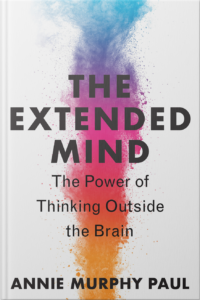 The Extended Mind The Power of Thinking Outside the Brain

An excerpt from The Extended Mind:

“Our culture insists that the brain is the sole locus of thinking, a cordoned-off space where cognition happens. This book argues otherwise: it holds that the mind constructs our thought processes from the resources available outside the brain. These resources include the feelings and movements of our bodies; the physical spaces in which we learn and work; and the other minds with which we interact—our classmates, colleagues, teachers, supervisors, friends. Sometimes, all three elements come together in especially felicitous fashion, as they did for the brilliant intellectual team of Amos Tversky and Daniel Kahneman. The two psychologists carried out much of their groundbreaking work on heuristics and biases—the human mind’s habitual shortcuts and distortions—by talking and walking together, through the bustling streets of Jerusalem or along the rolling hills of the California coast. “I did the best thinking of my life on leisurely walks with Amos,” Kahneman has said.

Many tomes have been written on human cognition, many theories proposed and studies conducted (Tversky’s and Kahneman’s among them). These efforts have produced countless illuminating insights, but they are limited by their assumption that thinking happens only inside the brain. Much less attention has been paid to the ways in which people use the world to think: the gestures of the hands, the space of a sketchbook, the act of listening to someone tell a story or the task of teaching someone else. These “extra-neural” inputs change the way we think; it could even be said that they constitute a part of the thinking process itself.

But where is the chronicle of this mode of cognition? Our scientific journals mostly proceed from the premise that the mental organ is a disembodied, placeless, asocial entity, a “brain in a vat”; our history books spin tales that attribute world-changing breakthroughs to individual men, thinking great thoughts on their own. Yet a parallel narrative has existed in front of us all along—a kind of secret history of thinking outside the brain. Scientists, artists, authors; leaders, inventors, entrepreneurs: they’ve all used the world as raw material for their trains of thought. This book aims to exhume that hidden saga, reclaiming its rightful place in any full accounting of how the human race has achieved its remarkable feats of intellect and creativity.”