The Body Learns: For years we’ve been telling kids to sit still and pay attention. That’s all wrong 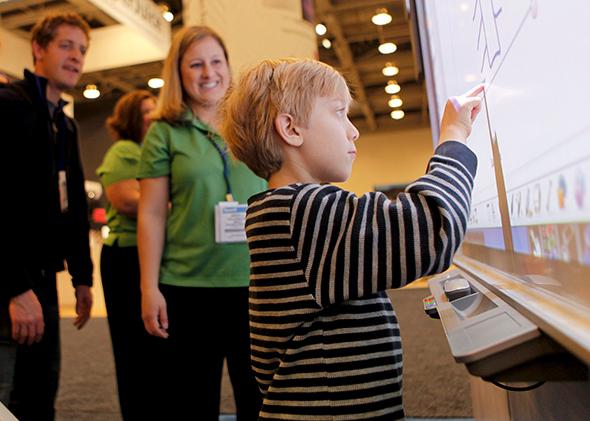 We can see this principle at work in the research of Arthur Glenberg of Arizona State University. In a series of experiments carried out more than a decade ago, Glenberg found that children’s reading comprehension improved when they acted out a written text, using a set of representational toys (a miniature barn and horse, for example, accompanied a story about a farm). Glenberg then demonstrated that the same procedure could work on a digital platform: In a 2011 experiment, he showed that having first- and second-grade students manipulate images of toys on a computer screen after reading a story benefits their comprehension as much as physical manipulation of the toys.

Mina Johnson Glenberg (who is married to Arthur Glenberg and also works at Arizona State, as director of the university’s Embodied Games for Learning lab) is taking the embodied approach even further, designing educational games that engage learners’ entire bodies.

A program called the Alien Health Game, for example, presents students with this scenario: “You have just woken up to find an alien under your bed. It is hungry and it is your job to figure out what makes it healthy.” From an array of foods, users learn to choose the ones that are most nutritious, and then must dance, jump, and exercise to help the alien digest his meal. (A bonus: The game is so physically active that it measurably elevates users’ heart rates.)

In other work, Johnson Glenberg employs Xbox Kinect–like technology to capture students’ movements as they interact with images projected onto a whiteboard. The interface can be used to teach subjects like physics, chemistry, and geology; in the geology module, for example, students use the movements of their bodies to deposit sediment layers, insert a fossil layer, and generate earthquakes in a virtual environment. The technology is being used in a half dozen American schools, including Quest to Learn in New York City and ChicagoQuest.

It’s early days for these real-world applications. But the research behind them can help teachers, parents and students better evaluate and use educational technology products that are already widely available. An awareness of embodied cognition, for example, might lead users to prefer touch-sensitive devices like the iPad, which respond directly to the movement of users’ fingers on the screen, over computers that interpose a keyboard between screen and user. According to John Black of Teachers College, technology that evokes movements that complement the concepts to be learned is also likely to be effective from an embodied point of view: For example, an application in which counting is expressed by tapping on a mouse (discrete movements that complement the discrete nature of counting) will better promote learning than a program that asks users to make a sliding movement as they count (a continuous action at odds with the discrete nature of counting).

Parents and educators can also treat the virtual “movements” involved in many educational programs and games as preparation for more traditional learning. For example, John Black and Jessica Hammer, also of Teachers College, showed that moving through the virtual spaces of the history game Civilization made players much better at learning history from a conventional textbook than players of the game The Sims. Even though Civilization players possessed no greater knowledge of history when they opened the textbook, their virtually embodied experience of grappling with the issues raised by historical simulations made them better prepared to absorb the lessons of the text.

Educators and parents can also help students incorporate bodily movements of their own into the use of educational technology, an approach that Black has applied to the teaching the programming language Scratch. Asking students to act out the motions they intend for the program’s virtual “agent” using their own bodies, and then programming the agents to make the same moves, has shown itself to be “a particularly effective learning approach,” Black writes. Even when they’re learning on computers, it’s wise to remember that students are more than mental machines.

This story was produced by The Hechinger Report, a nonprofit, nonpartisan education-news outlet affiliated with Teachers College, Columbia University.